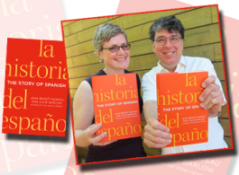 As a reader, I love to get lost in a book, but it takes a good author’s confident guidance to make it happen. Jean-Benoît Nadeau and Julie Barlow, I’m sorry to say, have failed in this respect. More than to anything else, The Story of Spanish appeals to a side of me that I rather dislike: the red-pen-wielding schoolteacher.

Chapter 1 starts out beautifully: ‘Three millennia ago, when Rome was still a swamp and Athens was barely strong enough to take on Troy …’ It’s the sort of style that bespeaks experience, and experience this husband-and-wife team have. Language journalists like myself, Barlow from Anglophone Canada, Nadeau from Quebec, they published The Story of French a few years ago. Both having studied Spanish, they now take on this most widely spoken of all Romance languages.

The first doubt arises as early as the fifth paragraph. Does the name ‘Spain’ really descend from a Punic word for ‘land of the rabbits’? Hmm … According to other sources, this etymology is possible, but several more have been proposed. One of the alternatives, ‘land where iron is forged’, also based on Punic, sounds at least as plausible. After all, what made Spain a popular destination for conquerors in Antiquity was its metal, a good deal more so than its rabbits.

A book like this, aiming at a wide audience, has no use for endless caveats and shades of doubt. I appreciate that. But the occasional well placed ‘likely’ or ‘according to some’ would have helped the reader to distinguish the rock-hard facts from those more akin to marshmallow. Oddly enough, Nadeau and Barlow start hedging their claims a lot more a bit farther on in the book, occasionally even in places where the need is not so obvious..

Then, there’s the errors, the outright and manifest errors. Classical Latin did have prepositions; Vulgar Latin didn’t introduce them, it just used them somewhat more. The grammarian Marcus Valerius Probus lived in the first, not the fourth century AD. No way does the word brother descend from the Latin frater – this inaccuracy is so glaring that I’ll give the authors the benefit of thinking that it was some editor who muddled their writing, turning a correct statement into a nonsense. But there is more (see the annex).

Even as the flaws pile up, I’m getting more and more annoyed by the all too florid, even corny passages in the book, which sometimes have no discernible meaning in linguistic terms. ‘Spanish became – at once – one of the most organized and systematic tongues in history and a finely honed tool used to express disorder and passion’ is a good example. So is ‘Language shapes how we organize our thoughts, our lives, and our nations – in short, our world.’ That’s superficial trash, if you’ll pardon my French.

I’ve only read the first few chapters so far. And I’m confident that like these, the rest of the book, too, has much to interest me. I love (and speak) Spanish, I love to read about the history of languages. And honestly, I would like nothing better than to take Nadeau and Barlow’s every word at face value. But I no longer can. Trust leaves by horse, and the first few chapters have sent it galloping.

Three more claims where strong caveats would be warranted:
* Proto-Indo-European was spoken in Turkey some 8,000 years ago. (There are several other contenders, in terms both of geography and dating.)
* The word ‘Basque’ is originally Celtic. (More likely, it’s … Basque.)
* ‘It was the Frenchman Hubert Lyautey who said, in 1912, ‘A language is a dialect with an army (…)’. (Other attributions are more likely.)

Definitely incorrect are the following statements:
* Classical Latin was hard for Romans to learn because it had six cases and a free word order. (So does Russian, and no Russian has trouble learning it. The real reason is that Classical Latin was no longer a living spoken language, even back then.)
* Toro for ‘bull’ is a Celtic loan. (Toro comes from the Latin taurus, and I can find no evidence anywhere else that it was borrowed from Celtic.)
* The Gothic word for ‘companion’ was galhaiba. (It was gahlaiba. A minor detail, of course. You see why I dislike the red-pen-wielding schoolteacher? He doesn’t know when to stop.)

5 thoughts on “The not so true Story of Spanish”