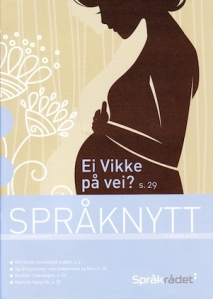 In its most recent issue, the Norwegian magazine Språknytt (Language News) published a short column that I wrote for them. You can find the Norwegian version here (in Nynorsk, to be exact). Highly unfortunately and somewhat to my annoyance, any reference to the Language Lover’s Guide to Europe app was suppressed. Well, anyway – it’s a beautiful magazine with friendly editors, and the publication did generate a modest amount of interest from Scandinavia for my app and books.

Since my Norwegian is not fit to print (I did study it for a while, but that was eight years ago and I never used it much), I wrote the article in English. I’ll reproduce it here. Any differences between this and the printed version are not my doing. Here goes:

I like history and I enjoy art. Honestly. But why do travel guide writers think that this is all tourists are interested in? No matter what guidebook you grab, all towns are described in terms of history and art (and, increasingly, shopping). But hey, people are more varied than that! Some of us love motorcycles, some geology. And some oddballs will make a detour to visit linguistic attractions. If only we knew where to find them.

When I visited Norway some years ago, I came within easy reach of Ivar Aasen-tunet, but I only discovered this much later. On my way up and down through Denmark, I failed to visit the Jelling runestones. Maybe I didn’t read my guidebook carefully enough, but I can’t help feeling it didn’t do justice to Jelling’s linguistic prominence.

Of course, I enjoy travelling all the same, both for its own sake and to indulge in foreign languages. Whether in Norway or in Ireland, in Switzerland or in Greece, there is always plenty to learn, to half-understand, to marvel at, to puzzle about. Even in my native Netherlands, I’m ever on the lookout for smatterings of dialect, archaic inscriptions and cutting-edge language trends. Still, it would be a great help having a guide to direct me to the major linguistic attractions of our continent.

In the end, I realised I’d have to write it myself. And so I embarked on a great journey of exploration. A digital journey, that is, from one website to the next. And boy, did I find stuff.

Ivar Aasen-tunet, finally. Way more runestones than I knew existed, both in museums and out in the open. The Codex Argenteus in Uppsala, the oldest book in a Germanic language. An optical telegraph in Stockholm. Mysterious inscriptions in the wilderness of the Arctic North. The Ibsen Museum in Oslo. And more, much more.

Outside Scandinavia, there are language museums in Lithuania, Hungary, France, Germany, Ukraine and Austria. There’s an Alphabet Walk in Croatia and an open-air dictionary in Switzerland. There are numerous linguistic minorities in Italy, museums for lexicographers in Britain, Germany and Holland, whistled languages in three Southern European countries, medieval Nordic runes on a statue in Venice… In a word, there’s a whole world of linguistic treasures out there.

Frankly, I feel like Vasco da Gama upon finding the sea route to India. But unlike da Gama, who only told the Portuguese king about his discovery, I share the information through a mobile application. If you’re a language lover, may I be your guide to Europe?