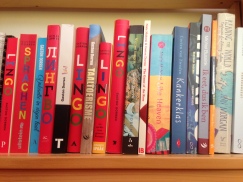 To me, ‘many more’ sounds silly. It reeks of inkhorn grammar, prescribed by some logical-minded schoolmaster who reasoned that if we say ‘many books’ we should also say ‘many more books’ rather than ‘much more books’. I’ve dutifully internalised the rule, but even after many years of obedience in speech and writing, it doesn’t feel quite right.

And I’ve just figured out why.

(Not in ‘many more happy returns of the day’, by the way. That’s different. Now, ‘many’ doesn’t intensify ‘more’, but simply counts the returns of the day, while ‘more’ means something like ‘in the future’. German and Dutch, and I believe also French and Spanish, would put this differently: something like ‘still many returns’ or ‘many returns more’.)

In spite of the above, I’m not actually going to use ‘much more books’ from now on. My priority it to write and sell many more books, and defying standard grammar is hardly the path to best-selling. Moreover, I’m a second-language speaker, so when it comes to English, though I’m granted a voice, I don’t get to vote. My job’s to fall in line.

But I would like to find out three things. One: do native speakers feel similarly about this? Two: did ‘many more’ indeed begin life as an inkhorn rule of grammar or did it come about organically in the spoken language? And related to these: do young children growing up with English go through a stage where they say ‘much more picture books’ rather than ‘many more picture books’?

10 thoughts on “Less of the many and more much, please”