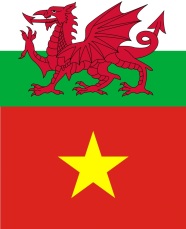 In yesterday’s blogpost about Vietnamese, I wrote that the abyss between the formal written language and the informal spoken language is particularly wide, and that I had heard this claimed also about Welsh. In response to this latter observation I received two comments which deserve to be rescued from the obscurity of the comments section to the full light of a proper blogpost. (I’ve shortened them very slightly.)

Number one was by Siôn Williams, who wrote that my aside about Welsh “is indeed true“, and continued:

Then you have the ‘other’ verbs – which have two forms: the periphrastic form (with the auxiliary verb), which is preferred in speech, and the short written form, which is used in the formal literary language. Let’s take the verbal-noun (the ‘true’ form of the Welsh verb, as there is no infinitive), canu (‘singing’).

Native speakers (and learners) only ‘learn’ the short forms, almost like a second or foreign language, once they have mastered the periphrastic forms, which are more common in speech.

Why is the formal (written) so different and difficult compared to the informal (spoken) language? Many reasons, I guess – including that the written forms hark back to the translation of the Bible in 1588 (making Wales officially a Protestant nation under Queen Elizabeth I of England) – a book which did so much in ensuring the language’s survival after the subordinating of it under the “Act of Union” of 1535. Further, and also as a result of this “Act of Union” and subsequent English and British State policy in imposing the English language and driving the Welsh language out of the classroom, subsequent generations of Welshpeople became illiterate in their mother tongue and could not write it. My great-grandmother (d. 1947) was illiterate all her life (in both Welsh and English; her will is signed with an X), and my own mother (b. 1925) has never felt at ease in writing or indeed reading Welsh – and will always look up English versions of forms etc. before she signs anything.

A good many of my compatriots then would not be able to ‘unpackage’ such forms as canasent (see above), yet would quite accurately and without as much as a blush be able to use the form mae nhw wedi canu in order to explain a concept of ‘a past-in-the past’ for 3rd person plural.”

To this was added to by Iwan Standley, who wrote, “I think one of the reasons formal Welsh is still in use is that there are many dialects of informal Welsh, some with significant differences. I have a Swedish relative who’s learnt some Welsh, and she’s remarked that Norwegian, Swedish and Danish are far more similar to each other than the dialects of north and south Welsh are.

Historically this was because the regions of Wales are fairly isolated from each other due to the terrain. It’s really only been since the 1960s that a national Welsh-language press and media have arisen, and public bodies have started using Welsh in official documents; public affairs were conducted in English previously.

So the question they face is, which version should they use? They would obviously like to be widely-understood, but if they use an informal register it would mean picking a geographical dialect – which could be seen to be favouring one area over another (not a good look for a national public body).

So they generally play it safe and use a somewhat-fossilised formal language, which is seen as being neutral (because nobody speaks it) at the cost of being removed from everyone’s day-to-day language. This formal, literary Welsh has now become the ‘standard’ even though no-one actually speaks it. It’s a sort of lingua franca I suppose, but one that very few are entirely comfortable with – the example you give of perfectly intelligent people being unsure if they can write a letter sounds very familiar.

A brief look at Quora and Wikipedia suggests Vietnames also has several very different dialects. I wonder if their use of formal language is for the same reason, then?”

That is a very good suggestion, because it’s perfectly correct that speakers of some dialects have trouble understanding each other. Only yesterday did I hear a story about a Vietnamese from the North who couldn’t make head nor tail of the information a hotel receptionist in the Central City of Huê was giving her. After asking five times to repeat what she had said, the guest gave up. Perhaps she should have asked her to write it down!

1 thought on “Dialects, a fossil and nothing in between”