You know that game where you keep translating a sentence back and forth between two languages, until the original statement is only a vage memory? It also works with transcription between alphabets. I just came across a real-life example.

In 1991, Franz Viehböck was Austria’s first Raumfahrer (astronaut or, in this case, cosmonaut). A correct name tag was stuck on his clothing, along with a Cyrillic version: Фибёк. That’s not a bad approximation of the original pronunciation,
/ˈfiːbœk/, and probably based on official rules for German-to-Russian transcription.

Name tag, on display at the House of Austrian History in Vienna.

After his flight, Viehböck got an official certificate, or rather two: one in Russian, one in English. But while the former once again spells his name as фибёк, the latter displays an entirely new version of his name: Feeberk.

That makes /ˈfiːbɜːk/ in IPA, which is pretty close to the German original if you ask me. But why didn’t the aerospace authorities check how their employee’s name was spelt? Didn’t they have a photocopy of his passport? Didn’t they have a  name tag left? Was there no radio contact? Did they do it on purpose because they were fed up with him? Was it an in-joke?

None of the above perhaps. This happened in the autumn of 1991. The Baltic republics had just broken away from the USSR, the Ukraine was to follow within weeks. The Union was not going to see the end of the year. All was turmoil.

Under the circumstances, issues of transcription may have taken a backseat, if not an ejection seat. Фибёк, Шмибёк – Feeberk, Shmeeberk. 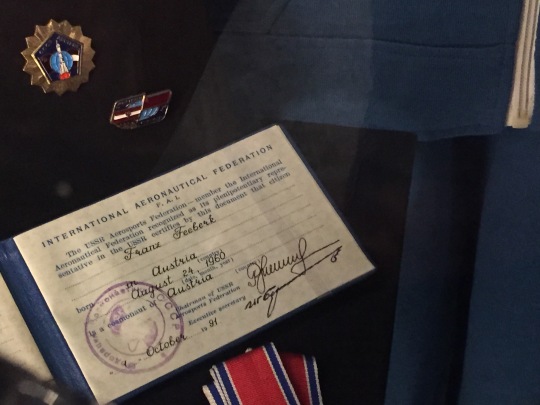 Certificate, on display in the same museum.