Throw your mind back to the very first time you tried your little hand at writing. With the unfamiliar pen between your fingers and your tongue between your lips, you gave of your best, but unless you were a calligraphic child prodigy, the result was, well, nothing to write home about. It looked shaky and straggly and, in a word, messy. Yet it didn’t stop your parents from being touched by your scribbles.

Call me weird, but that’s how I too felt earlier this week when I visited the Epigraphic Museum in Rome’s Baths of Diocletian. As its name and location suggest, it focuses on inscriptions from Antiquity, predominantly in Latin. Many of them look vaguely familiar: for the last five centuries or so, inscriptions in European and New World monuments have tended to emulate the Classical example. If you wonder what I’m talking about, open a new document in Word, choose the Times New Roman typeface and write a line in capitals.

The Praeneste fibula. Or rather a copy of it, unfortunately. The original is kept in a museum for prehistory (?!) in some Roman suburb.

Besides the many inscriptions on slabs of stone, there were also some short texts on small objects. There was one that I’d heard of before: a brooch known as the Praeneste fibula (see photograph, click to enlarge), dating from the seventh century BCE. On it are the words Manios med fhe fhaked Numasioi, which in Classical Latin would read Manius me fecit Numerio and in English ‘Manius made me for Numerius’. The phrase is rather archaic: the grammar, the shape of several letters and even the right-to-left direction of writing. 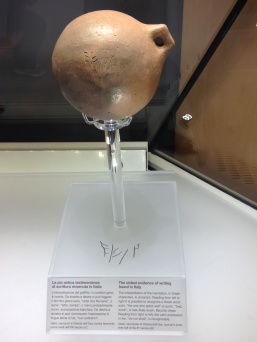 I enjoyed seeing it, but what touched me was another item: a simple clay pot. Found in an eighth-century BCE woman’s tomb, some 12 miles east of Rome, it displays just 5 characters (I would have guessed 4; see and click picture). They form the oldest extant text in Europe outside Greece. According to experts, the letters are Greek, though they’re not all that easily identifiable. The language might be Greek too: read as eulin, the text means ‘she who spins well’; read as eunin, ‘resting place’. But perhaps we should read it from right to left, which gives us the Old Latin ni lue or ‘don’t steal’.

The writing is impressively old but, frankly, not very good. We are looking here at the pothooks of a less than competent scribbler. But then, he is the first Italic scribbler whose work has come down to us. And given that Western European writing began in Italy, the letters on this pot can be considered our first scribbles, dating from the time when we were learning the skill.

Having enjoyed Rome so much – it was my first time there – I’d like to share some of the language-related treasures I saw.

The Epigraphic Museum mentioned above, which is part of the Roman National Museum, has much more to offer than just a brooch, a pot and some more inscriptions in Old Latin. Let me mention a few other highlights:

The Capitoline and Vatican Museums, both worth a visit for many reasons, have additional attractions for the language enthusiast. The former includes a small section, situated at the beginning of the tunnel between the old and the new buildings, that focuses on ancient languages. It tells the visitor about Roman language policy and shows inscriptions in several languages, including Hebrew and Palmyran, the Assyrian dialect of Palmyra – the
city now in the throes of destruction by IS bedlamites. 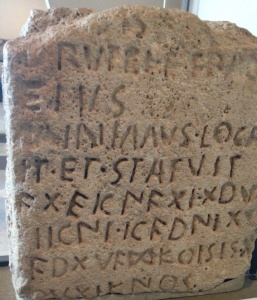 The Vatican’s Etruscan Museum contains several works of art with inscriptions in the largely undeciphered Etruscan language, as well as one in Gallic, the Celtic language of Gaul (see picture). The Egyptian Museum, a few doors down the corridor, has a good deal of hieroglyphic and some hieratic writings on display. However, I’m embarrassed to say that, what with all the obelisks scattered around the old city, I had seen my fill of hieroglyphs. Rome is so rich that this is how blasé it can make you.

More specialised tourist information about Rome and other European cities can be found in the Language Lover’s Guide to Europe, an inexpensive app available for Android and iOS. [Update: sorry, no longer available.]