Britain is more multilingual than its image suggests, but at the same time too monolingual for its own good. What are its prospects? 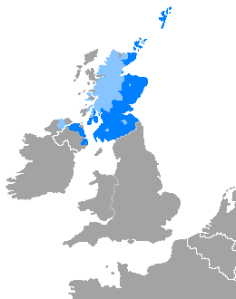 What would have happened to ‘the Scots leid’ if the Yes side had won the referendum? It has been officially recognised as a language separate from English since 2001, when Britain ratified the Charter for Minority and Regional Languages. But would Scottish independence have changed the character of Scots? Could the language have become less, well – English?

That’s not as far-fetched as it may seem. Norwegian and Danish were once considered a single language, but two fairly different standard languages emerged after Norway’s breakaway in 1814. Bosnians spoke Serbo-Croatian before independence (1992), but Serbian, Croatian or Bosnian nowadays. There’s little to distinguish the three of them yet, but check back in a century. END_OF_DOCUMENT_TOKEN_TO_BE_REPLACED

DON'T FEEL LIKE READING?
‣ Go to my video playlist, with mini documentaries, interviews and talks.
‣ Watch a TV interview in Spanish about my book Lingo.