English has hundreds of expressions containing the word Dutch or Dutchman. Some are in common use, whereas others are specialised, regional or outright archaic. This video has me mucking about with some of them as well as announcing a publication. (Dutch spoken, English subtitles available.)

The scribbles on the right are not just doodles, a badly drawn rough sea or an attempt by a 5-year-old to emulate grown-ups’ fascinating handwriting. A real adult has written a real word here: minimum.

Even if you had figured that out for yourself, you’ll agree it’s not easily legible. That’s due to a shortcoming in our alphabet: the similarity between hand-written i, n, u and m. In many words confusion is never far away, which is why monks, clerks and other writers have come up with all sorts of clever tricks. END_OF_DOCUMENT_TOKEN_TO_BE_REPLACED 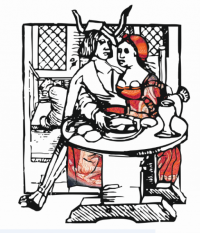 Moenen and Mariken.
Woodcut from 1518.

I’m not very superstitious, I’m even less religious and I’m not in the least Norwegian. Even so, if given the choice, I’d rather not live on Devil Street, Beelzebub Crescent or Satan Square. But surely such names don’t exist, you may say – and what has Norway to do with it anyway?

You’re right: as far as I’m aware (I haven’t googled for fear of spoiling my story) there are no such overtly diabolically named streets. But this morning, while delivering some books to buyers here in Amersfoort, I came across Moenenstraat (MOO-nen-straht, Moenen Street). Moenen is a character from the late medieval play Mariken van Nieumeghen. Calling him the bad guy in the story would be understating it: he’s no less than the devil himself, the prince of darkness, the monarch of hell, evil incarnate. Moenenstraat – some street to live on! END_OF_DOCUMENT_TOKEN_TO_BE_REPLACED

DON'T FEEL LIKE READING?
‣ Go to my video playlist, with mini documentaries, interviews and talks.
‣ Watch a TV interview in Spanish about my book Lingo.